Reunification Palace was the base of  Vietnamese General Ngo Dinh Diem until his death in 1963. It made its name in global history in 1975. A tank belonging to the North Vietnamese Army crashed through its main gate, ending the Vietnam War. Today, it's a must-visit for tourists in Ho Chi Minh City.

The palace is like a time capsule frozen in 1975. You can see two of the original tanks used in the capture of the palace parked in the grounds. Reunification Palace was the home and workplace of the French Governor of Cochin-China. It has lush gardens, secret rooms, antique furniture, and a command bunker. It's still in use to host important occasions in Ho Chi Minh, including APEC summits.

The Reunification Palace has five levels. The basement features tunnels, a war room and telecommunications centre. The war command room has original maps on its walls. Period telecommunications equipment are also on display. Its adjoining basement rooms display war propaganda materials. On the third floor, there's a card playing room while the fourth houses a casino. Reunification Palace's rooftop terrace is fitted with a heliport.

The Reunification Palace is open from 07:30-12:00 and 13:00-16:00. You can buy tickets at the main gate, located on the east side of the palace gardens. Security will check your bags for safety reasons. Free guided tours are available in English, French, Japanese and Chinese. The palace is on Man Ky Khoi Nghia Street, close to the Ben Thanh Market. 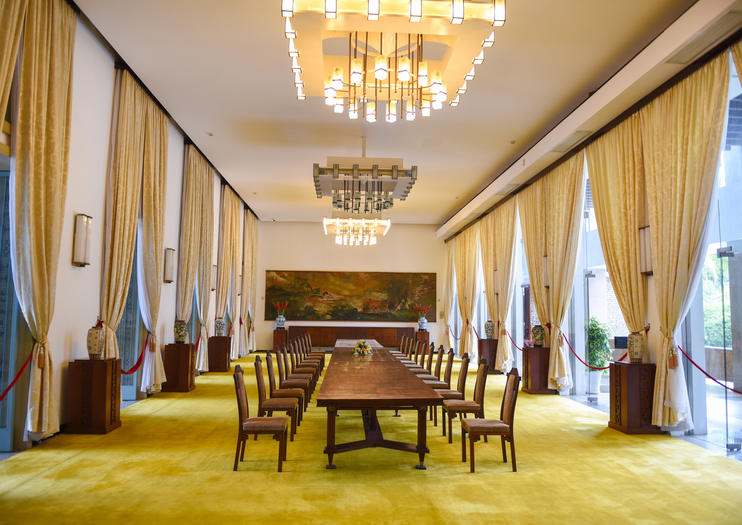